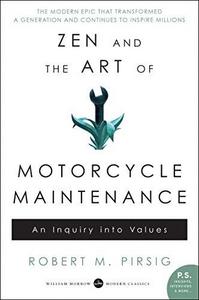 Zen and the Art of Motorcycle Maintenance

Zen and the Art of Motorcycle Maintenance: An Inquiry into Values (ZAMM) is a book by Robert M. Pirsig first published in 1974. It is a work of fictionalized autobiography, and is the first of Pirsig's texts in which he explores his "Metaphysics of Quality". Pirsig received 126 rejections before an editor finally accepted the book for publication—and he did so thinking it would never generate a profit. It was subsequently featured on best-seller lists for decades, with initial sales of at least 5 million copies worldwide. The title is an apparent play on the title of the 1948 book Zen in the Art of Archery by Eugen Herrigel. In its introduction, Pirsig explains that, despite its title, "it should in no way be associated with that great body of factual information relating to orthodox Zen Buddhist practice. It's not very factual on motorcycles, either."
Read more or edit on Wikipedia