Fighting Fantasy is a series of single-player role-playing gamebooks created by Steve Jackson and Ian Livingstone. The first volume in the series was published in paperback by Puffin in 1982. The series distinguished itself by mixing Choose Your Own Adventure-style storytelling with a dice-based role-playing element included within the books themselves. The caption on many of the covers claimed each title was an adventure "in which YOU are the hero!" The majority of the titles followed a fantasy theme, although science fiction, post-apocalyptic, superhero, and modern horror gamebooks were also published. The popularity of the series led to the creation of merchandise such as action figures, board games, role-playing game systems, magazines, novels, and video games. Puffin ended the series in 1995, but the rights to the series were eventually purchased by Wizard Books in 2002. Wizard published new editions of the original books and also commissioned six new books over two series, ending in 2012. The rights were then acquired by Scholastic in 2017, which has since published two new titles and reissued ten of the original books with new artwork.
Read more or edit on Wikipedia 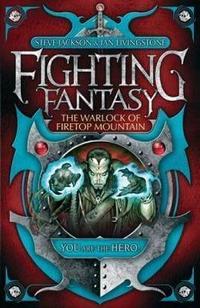 The Warlock of Firetop Mountain

The Citadel of Chaos

The Forest of Doom