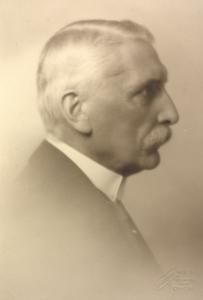 Hans von Arnim (14 September 1859, Groß Fredenwalde – 26 May 1931, Vienna) was a German-Austrian classical philologist, who specialized in studies of Plato and Aristotle. He studied classical philology at the University of Greifswald as a pupil of Ulrich von Wilamowitz-Moellendorf. From 1881 to 1888 he worked as a schoolteacher in Elberfeld and Bonn, then obtained his habilitation in 1888 from the University of Halle. In 1893 he became a full professor at Rostock, then in 1900 was appointed chair of Greek philology at the University of Vienna as a successor to Theodor Gomperz. In 1914 he relocated as a professor to the newly founded University of Frankfurt, and in 1921 returned to the University of Vienna.He was elected a foreign member of the Royal Netherlands Academy of Arts and Sciences in 1919.
Read more or edit on Wikipedia