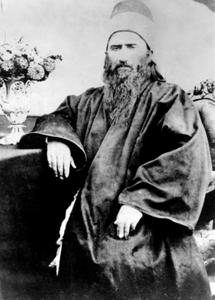 founder of the Bahá'í Faith

Baháʼu'lláh (b. Ḥusayn-ʻAlí, 12 November 1817 – 29 May 1892) was a Persian religious leader, and the founder of the Baháʼí Faith, which advocates universal peace and unity among all races, nations, and religions. Born into Persian nobility, at the age of 27 he accepted the religious claims of the Báb and became an important promoter of the new faith, for which he was tortured and imprisoned in Tehran. During confinement in 1853-4, he claimed that a vision brought him divine inspiration. He was banished from Persia and took up residence in Iraq. Years later, while facing another forced exile from Ottoman authorities, he announced his own religious claims in 1863 to the followers of the Báb, followed by letters to world leaders beginning in 1867. In 1868, on orders from Sultan Abdulaziz, Baháʼu'lláh and about 80 of his family and followers were rounded up from their homes in Edirne and put under heavy confinement in the prison-city of Akka. By 1877 the sentence was no longer being enforced, and he lived his final years in a nearby home, while technically a prisoner of the city. Baháʼu'lláh's notable writings include The Hidden Words (Kurdistan: 1858), the Book of Certitude (Baghdad: 1862) and the Kitáb-i-Aqdas (Akka: 1873), which all vary in themes. His teachings revolve around the unity of God, of religion, and of mankind. God is seen to have sent a series of divine messengers that are unified in purpose, and draw humanity toward greater spiritual, moral, and intellectual truths. Baháʼu'lláh's claim to be the most recent in this series is the basis for the faith's widespread recognition as the only independent world religion to emerge in the modern age, not being a sect of any other faith. Besides spiritual growth, his teachings also promote the equality of men and women, marriage and family life, an end to racial and national prejudice, and some prescriptions on how to live a Baháʼí life and organize the Baháʼí community. His burial place near Akka is a destination of pilgrimage for his followers, as well as the direction they face for daily obligatory prayers. The Baháʼí World Centre sits in nearby Haifa. His will appointed his eldest son, ʻAbdu'l-Bahá, as an authorized interpreter of his writings and to succeed him in directing the affairs of the Baháʼí Faith. By the 1950s there were about 200,000 Baháʼís in the world, mostly in Iran, but starting in the 1960s the religion expanded around the world, and by the 21st century there were reliably over 5 million registered Baháʼís in the world.
Read more or edit on Wikipedia