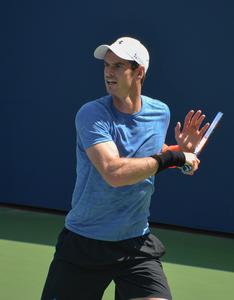 Sir Andrew Barron Murray OLY (born 15 May 1987) is a British professional tennis player from Scotland. He was ranked world No. 1 by the Association of Tennis Professionals (ATP) for 41 weeks, and finished as the year-end No. 1 in 2016. He has won three Grand Slam singles titles, two at Wimbledon (2013 and 2016) and one at the US Open (2012), and has reached eleven major finals. Murray was ranked in the top 10 for all but one month from July 2008 through October 2017, and finished no lower than No. 4 in eight of the nine year-end rankings during that span. Murray has won 46 ATP singles titles, including 14 ATP Masters 1000 events. Originally coached by his mother Judy alongside his older brother Jamie, Murray moved to Barcelona at age 15 to train at the Sánchez-Casal Academy. He began his professional career around the time Roger Federer and Rafael Nadal established themselves as the two dominant players in men's tennis. Murray had immediate success on the ATP Tour, making his top 10 debut in 2007 at age 19. By 2010, Murray and Novak Djokovic had separated themselves from the rest of men's tennis, joining Federer and Nadal in the Big Four, the group of players who dominated men's tennis during the 2010s. Murray initially struggled against the rest of the Big Four, losing his first four Grand Slam finals, three to Federer and one to Djokovic. He made his major breakthrough in 2012 by defeating Djokovic to win the US Open. With this title, he became the first British Grand Slam singles champion since Virginia Wade in 1977, and the first male champion since Fred Perry in 1936. A month earlier, he won the men's singles gold medal against Federer at the 2012 London Olympics. From 2013 through 2016, Murray reached another six major finals. He won two of these encounters, at Wimbledon in 2013 and 2016. Murray had his career-best season in 2016. During that year, Murray made three major finals, winning Wimbledon. He also defended his title at the 2016 Rio Olympics to become the only man with two Olympic gold medals in singles. Murray also became world No. 1 for the first time and clinched the year-end No. 1 ranking by winning his only ATP Finals against Djokovic. Since 2016, he has struggled with various injuries and fell out of the top 100 in 2018 due to only seldom playing on tour. Murray is an all-court player who excels in particular at defense, returning serve and constructing points. He is generally regarded as having one of the best and most consistent two-handed backhands on the ATP Tour. Murray is considered a national hero in Great Britain for reestablishing the country as a leading force in men's tennis for the first time since the early 20th century. He and his brother led the Great Britain Davis Cup team to a title in 2015. Murray has been outspoken as a feminist, and became only the second top 10 player in the history of the ATP Tour to have a female coach when he hired Amélie Mauresmo.
Read more or edit on Wikipedia