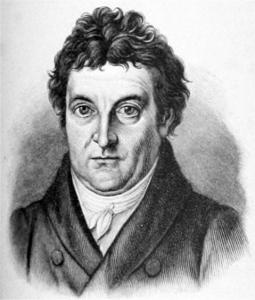 Johann Gottlieb Fichte (; German: [ˈjoːhan ˈɡɔtliːp ˈfɪçtə]; 19 May 1762 – 29 January 1814) was a German philosopher who became a founding figure of the philosophical movement known as German idealism, which developed from the theoretical and ethical writings of Immanuel Kant. Recently, philosophers and scholars have begun to appreciate Fichte as an important philosopher in his own right due to his original insights into the nature of self-consciousness or self-awareness. Fichte was also the originator of thesis–antithesis–synthesis, an idea that is often erroneously attributed to Hegel. Like Descartes and Kant before him, Fichte was motivated by the problem of subjectivity and consciousness. Fichte also wrote works of political philosophy; he has a reputation as one of the fathers of German nationalism.
Read more or edit on Wikipedia