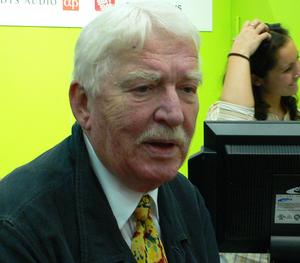 Hans Folke "Hasse" Alfredson (28 June 1931 – 10 September 2017) was a Swedish actor, film director, writer, and comedian. He was born in Malmö, Sweden. He is known for his collaboration with Tage Danielsson as the duo Hasse & Tage and their production company AB Svenska Ord ("Swedish Words Ltd"). His most celebrated contribution to their brand of humorist humanism was his ability to extemporize wildly absurd comic situations, for example in the Lindeman dialogues. Towards the end of his life, Alfredson made it clear that he preferred his real name, Hans, over the commonly used nickname "Hasse".He was the father of directors Daniel and Tomas Alfredson.
Read more or edit on Wikipedia