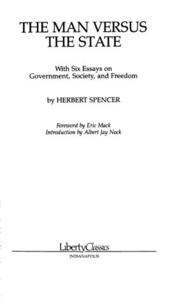 The Man Versus The State

The Man Versus the State is a work of political theory by Herbert Spencer. It was first published in book form in 1884 by Williams and Norgate, London and Edinburgh, from articles previously published in The Contemporary Review. The book consists of four main chapters: The New Toryism, The Coming Slavery, The Sins of Legislators and The Great Political Superstition. In this book, English libertarian sociologist Herbert Spencer sees a statist corruption appearing within the liberal ideological framework, and warns of what he calls "the coming slavery". He argues that liberalism, which liberated the world from slavery and feudalism, was undergoing a transformation. Its new love for the state would put liberalism behind a movement to create a new despotism that would be worse than the old. Henry Hazlitt commented that this was "One of the most powerful and influential arguments for limited government, laissez faire and individualism ever written." "The function of Liberalism in the past was that of putting a limit to the powers of kings. The function of true Liberalism in the future will be that of putting a limit to the power of Parliaments."
Read more or edit on Wikipedia