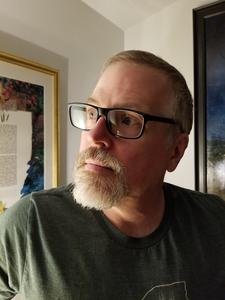 Jeff VanderMeer (born July 7, 1968) is an American author, editor, and literary critic. Initially associated with the New Weird literary genre, VanderMeer crossed over into mainstream success with his bestselling Southern Reach Trilogy. The trilogy's first novel, Annihilation, won the Nebula and Shirley Jackson Awards, and was adapted into a Hollywood film by director Alex Garland. Among VanderMeer's other novels are Shriek: An Afterword and Borne. He has also edited with his wife Ann VanderMeer such influential and award-winning anthologies as The New Weird, The Weird, and The Big Book of Science Fiction.VanderMeer has been called "one of the most remarkable practitioners of the literary fantastic in America today," with The New Yorker naming him the "King of Weird Fiction". VanderMeer's fiction is noted for eluding genre classifications even as his works bring in themes and elements from genres such as postmodernism, ecofiction, the New Weird and post-apocalyptic fiction.VanderMeer's writing has been described as "evocative" and containing "intellectual observations both profound and disturbing," and has been compared with the works of Jorge Luis Borges, Franz Kafka, and Henry David Thoreau.
Read more or edit on Wikipedia