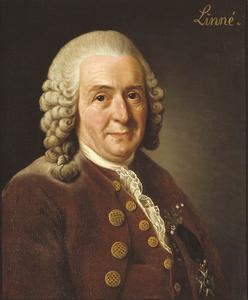 Carl Linnaeus (; 23 May 1707 – 10 January 1778), also known after his ennoblement in 1761 as Carl von Linné (Swedish pronunciation: [ˈkɑːɭ fɔn lɪˈneː] (listen)), was a Swedish botanist, zoologist, taxonomist, and physician who formalised binomial nomenclature, the modern system of naming organisms. He is known as the "father of modern taxonomy". Many of his writings were in Latin; his name is rendered in Latin as Carolus Linnæus and, after his 1761 ennoblement, as Carolus a Linné. Linnaeus was born in Råshult, the countryside of Småland, in southern Sweden. He received most of his higher education at Uppsala University and began giving lectures in botany there in 1730. He lived abroad between 1735 and 1738, where he studied and also published the first edition of his Systema Naturae in the Netherlands. He then returned to Sweden where he became professor of medicine and botany at Uppsala. In the 1740s, he was sent on several journeys through Sweden to find and classify plants and animals. In the 1750s and 1760s, he continued to collect and classify animals, plants, and minerals, while publishing several volumes. He was one of the most acclaimed scientists in Europe at the time of his death. Philosopher Jean-Jacques Rousseau sent him the message: "Tell him I know no greater man on earth." Johann Wolfgang von Goethe wrote: "With the exception of Shakespeare and Spinoza, I know no one among the no longer living who has influenced me more strongly." Swedish author August Strindberg wrote: "Linnaeus was in reality a poet who happened to become a naturalist." Linnaeus has been called Princeps botanicorum (Prince of Botanists) and "The Pliny of the North". He is also considered one of the founders of modern ecology.In botany and zoology, the abbreviation L. is used to indicate Linnaeus as the authority for a species' name. In older publications, the abbreviation "Linn." is found. Linnaeus's remains constitute the type specimen for the species Homo sapiens following the International Code of Zoological Nomenclature, since the sole specimen that he is known to have examined was himself.
Read more or edit on Wikipedia