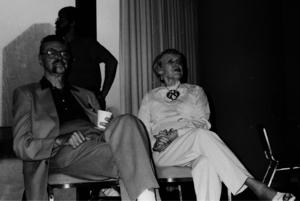 Catherine Crook de Camp (November 6, 1907 – April 9, 2000) was an American science fiction and fantasy author and editor. Most of her work was done in collaboration with her husband L. Sprague de Camp, to whom she was married for sixty years. Her solo work was largely non-fiction.
Read more or edit on Wikipedia