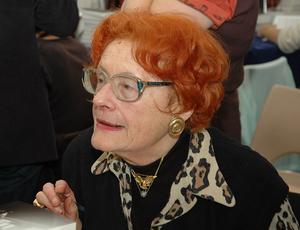 Annie Hausen (4 August 1926 – 22 April 2020), known by her pen name Catherine Paysan, was a French writer. She won the Grand prix de littérature de la SGDL for her lifetime’s writing. The daughter of Auguste and Marthe Roulette, she was born Annie Roulette in Aulaines in the Sarthe department of France. She attended a lycée for girls in Le Mans from 1938 to 1939 and then the boys' lycée (now the Lycée Montesquieu) from 1939 to 1945 while the girls' school was being used as a hospital. She taught at a collège in Paris, where she met her future husband, a Hungarian; after her marriage, she retired from teaching and returned to her native village.She published several novels, five autobiographical works, two collections of poetry and two plays, and adapted several of her works for film. In 1977, she received the Grand prix de littérature de la SGDL for the whole of her work.Paysan was named an Officier of the Legion of Honour in 2011. She was also named a Knight in the French National Order of Merit.
Read more or edit on Wikipedia