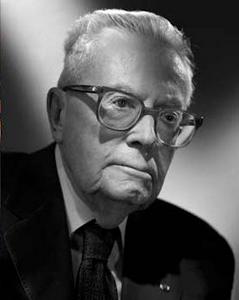 Maurice Félix Charles Allais (31 May 1911 – 9 October 2010) was a French physicist and economist, the 1988 winner of the Nobel Memorial Prize in Economic Sciences "for his pioneering contributions to the theory of markets and efficient utilization of resources", for Maurice Allais contribution, along with John Hicks (Value and Capital, 1939) and Paul Samuelson (The Foundations of Economic Analysis, 1947), to neoclassical synthesis. They formalize the self-regulation of markets, that Keynes refuted, while reiterating some of his ideas. Born in Paris, France, Allais attended the Lycée Lakanal, graduated from the École Polytechnique in Paris and studied at the École nationale supérieure des mines de Paris. His academic and other posts have included being Professor of Economics at the École Nationale Supérieure des Mines de Paris (since 1944) and Director of its Economic Analysis Centre (since 1946). In 1949, he received the title of doctor-engineer from the University of Paris, Faculty of Science. He also held teaching positions at various institutions, including at the University of Paris X-Nanterre. His first works oriented him towards the sciences of the concrete and the experiments of fundamental physics, on which he will also publish numerous works, notably on pendular oscillations and the laws of gravitation. It's after a trip in 1933 to the United States during the Great Depression, that he decides to make the economy. Allais died at his home in Saint-Cloud, near Paris, at the age of 99.Allais considered Léon Walras, Wilfredo Pareto, and Irving Fisher to be his primary influences. He was reluctant to write in or translate his work into English, and many of his major contributions became known to the dominant community only when they were independently rediscovered or popularized by English-speaking economists. At the same time, he claimed Keynes's liberalism and declared himself in favor of an important public sector. Allais attended the inaugural meeting of the Mont Pelerin Society, but he was alone among the attendees to refuse to sign the statement of aims because of a disagreement over the extent of property rights. He exerted an important influence, at the end of the war, on French economists such as Gérard Debreu, Jacques Lesourne, Edmond Malinvaud and Marcel Boiteux. Paul Samuelson said "Had Allais earliest writings been in English, a generation of economic theory would have taken a different course", and felt the Nobel Prize should have been awarded to him much earlier. Assar Lindbeck, the chairman of the selection committee considered Allais as "a giant within the world of economic analysis".
Read more or edit on Wikipedia