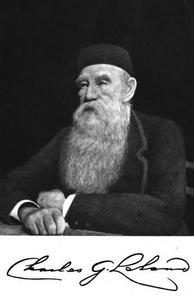 Charles Godfrey Leland (August 15, 1824 – March 20, 1903) was an American humorist and folklorist, born in Philadelphia, Pennsylvania. He was educated at Princeton University and in Europe. Leland worked in journalism, travelled extensively, and became interested in folklore and folk linguistics. He published books and articles on American and European languages and folk traditions. He worked in a wide variety of trades, achieved recognition as the author of the comic Hans Breitmann’s Ballads, and fought in two conflicts. He wrote Aradia, or the Gospel of the Witches, which became a primary source text for Neopaganism half a century later.
Read more or edit on Wikipedia