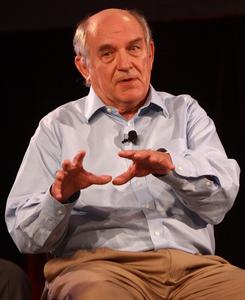 Charles Alan Murray (; born January 8, 1943) is an American political scientist, writer and public speaker. He is the W.H. Brady Scholar at the American Enterprise Institute, a conservative think tank in Washington, D.C.Murray's work has been and remains highly controversial.His book Losing Ground: American Social Policy 1950–1980 (1984) discussed the American welfare system. He co-wrote the controversial book The Bell Curve (1994), co-authored with Richard Herrnstein, in which the authors argue that in American society, in the course of the 20th century, intelligence became a better predictor than parental socioeconomic status or education level of many individual outcomes, including income, job performance, pregnancy out of wedlock, and crime, and that social welfare programs and education efforts to improve social outcomes for the disadvantaged are largely counterproductive.
Read more or edit on Wikipedia