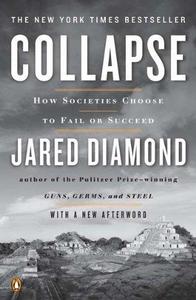 Collapse: How Societies Choose to Fail or Succeed

Collapse: How Societies Choose to Fail or Succeed (titled Collapse: How Societies Choose to Fail or Survive for the British edition) is a 2005 book by academic and popular science author Jared Diamond, in which the author first defines collapse: "a drastic decrease in human population size and/or political/economic/social complexity, over a considerable area, for an extended time." He then reviews the causes of historical and pre-historical instances of societal collapse—particularly those involving significant influences from environmental changes, the effects of climate change, hostile neighbors, trade partners, and the society's response to the foregoing four challenges—and considers the success or failure different societies have had in coping with such threats. While the bulk of the book is concerned with the demise of these historical civilizations, Diamond also argues that humanity collectively faces, on a much larger scale, many of the same issues, with possibly catastrophic near-future consequences to many of the world's populations.
Read more or edit on Wikipedia