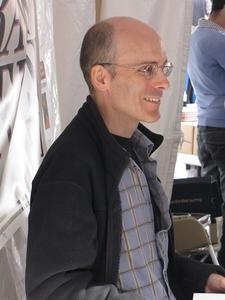 Chester William David Brown (born 16 May 1960) is a Canadian cartoonist. Brown has gone through several stylistic and thematic periods. He gained notice in alternative comics circles in the 1980s for the surreal, scatological Ed the Happy Clown serial. After bringing Ed to an abrupt end, he delved into confessional autobiographical comics in the early 1990s and was strongly associated with fellow Toronto-based cartoonists Seth and Joe Matt, and the contemporary autobiographical comics trend. Two graphic novels came from this period: The Playboy (1992) and I Never Liked You (1994). Surprise mainstream success in the 2000s came with Louis Riel (2003), a historical-biographical graphic novel about rebel Métis leader Louis Riel. Paying for It (2011) drew controversy as a polemic in support of decriminalizing prostitution, a theme he explored further with Mary Wept Over the Feet of Jesus (2016), a book of adaptations of stories from the Bible that Brown believes promote pro-prostitution attitudes among early Christians.Brown draws from a range of influences, including monster and superhero comic books, underground comix, and comic strips such as Harold Gray's Little Orphan Annie. His later works employ a sparse drawing style and flat dialogue. Rather than the traditional method of drawing complete pages, Brown draws individual panels without regard for page composition and assembles them into pages after completion. Since the late 1990s Brown has had a penchant for providing detailed annotations for his work and extensively altering and reformatting older works. Brown at first self-published his work as a minicomic called Yummy Fur beginning in 1983; Toronto publisher Vortex Comics began publishing the series as a comic book in 1986. The content tended towards controversial themes: a distributor and a printer dropped it in the late 1980s, and it has been held up at the Canada–United States border. Since 1991, Brown has associated himself with Montreal publisher Drawn & Quarterly. Following Louis Riel Brown ceased serializing his work to publish graphic novels directly. He has received grants from the Canada Council to complete Louis Riel and Paying for It.
Read more or edit on Wikipedia