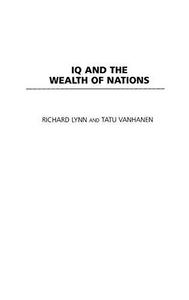 IQ and the Wealth of Nations

IQ and the Wealth of Nations is a 2002 book by psychologist Richard Lynn and political scientist Tatu Vanhanen. The authors argue that differences in national income (in the form of per capita gross domestic product) are correlated with differences in the average national intelligence quotient (IQ). They further argue that differences in average national IQs constitute one important factor, but not the only one, contributing to differences in national wealth and rates of economic growth. The book has drawn widespread criticism from other academics. Critiques have included questioning of the methodology used, the incompleteness of the data, and the conclusions drawn from the analysis. The 2006 book IQ and Global Inequality is a follow-up to IQ and the Wealth of Nations by the same authors.
Read more or edit on Wikipedia