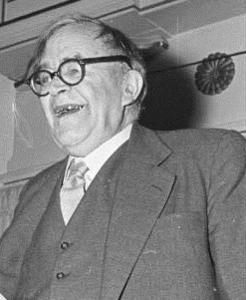 Karl Barth (; German: [bart]; (1886-05-10)10 May 1886 – (1968-12-10)10 December 1968) was a Swiss Calvinist theologian. Barth is well-known in theology for his landmark commentary The Epistle to the Romans, his involvement in the Confessing Church, including his authorship of the Barmen Declaration, and especially his unfinished multi-volume theological summa the Church Dogmatics (published between 1932–1967). Barth's influence expanded well beyond the academic realm to mainstream culture, leading him to be featured on the cover of Time on 20 April 1962.Like many Protestant theologians of his generation, Barth was educated in a liberal theology influenced by Adolf von Harnack, Friedrich Schleiermacher and others. His pastoral career began in the rural Swiss town of Safenwil, where he was known as the "Red Pastor from Safenwil". There he became increasingly disillusioned with the liberal Christianity in which he had been trained. This led him to write the first edition of his The Epistle to the Romans (a.k.a. Romans I), published in 1919, in which he resolved to read the New Testament differently. Barth began to gain substantial worldwide acclaim with the publication in 1921 of the second edition of his commentary on The Epistle to the Romans, in which he openly broke from liberal theology. He influenced many significant theologians such as Dietrich Bonhoeffer who supported the Confessing Church, and Jürgen Moltmann, Helmut Gollwitzer, James H. Cone, Wolfhart Pannenberg, Rudolf Bultmann, Thomas F. Torrance, Hans Küng, and also Reinhold Niebuhr, Jacques Ellul, and novelists such as Flannery O'Connor, John Updike, and Miklós Szentkuthy. Among many other areas, Barth has also had a profound influence on modern Christian ethics. He has influenced the work of ethicists such as Stanley Hauerwas, John Howard Yoder, Jacques Ellul and Oliver O'Donovan.
Read more or edit on Wikipedia