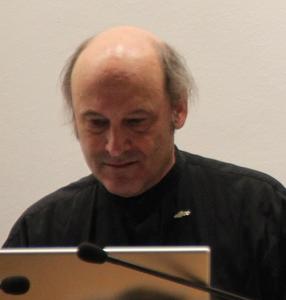 Christopher Crawford (born June 1, 1950) is an American video game designer and writer. Hired by Alan Kay to work at Atari, Inc., he wrote the computer wargame Eastern Front (1941) for the Atari 8-bit family which was sold through the Atari Program Exchange and then later Atari's official product line. After leaving Atari, he wrote a string of games beginning with Balance of Power for Macintosh. Writing about the process of developing games, he became known among other creators in the nascent home computer game industry for his passionate advocacy of game design as an art form. He self-published The Journal of Computer Game Design and founded the Computer Game Developers Conference (later renamed to the Game Developers Conference). In 1992 Crawford withdrew from commercial game development and began experimenting with ideas for a next generation interactive storytelling system. In 2018, Crawford announced that he had halted his work on interactive storytelling, concluding that it will take centuries for civilization to embrace the required concepts.
Read more or edit on Wikipedia