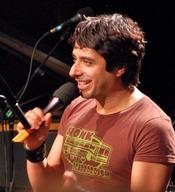 Jian Ghomeshi (born June 9, 1967) is a British-born Persian-Canadian broadcaster, writer, musician, producer and former CBC personality. From 1990 to 2000, he was a vocalist and drummer in the Thornhill-based folk-pop band Moxy Früvous. In the 2000s, he became a television and radio broadcaster. He hosted, among others, the CBC Newsworld program Play (2002–2005), the CBC Radio One program The National Playlist (2005–2006), and the CBC Radio One program Q, which he co-created and hosted from 2007 to 2014, until he was fired by the CBC. Q, which featured interviews with prominent cultural and entertainment figures, became the highest rated show in its timeslot in CBC history. In 2014 and 2015, Ghomeshi was the subject of allegations of sexual assault and sexual harassment; he was eventually arrested. In late 2015, Ghomeshi pleaded not guilty to the charges and his trial began in early 2016. That March he was acquitted of five of the charges, and in May the Crown withdrew the last remaining charge after Ghomeshi signed a peace bond and apologized to his accuser. In April 2017, Ghomeshi launched a new online venture, The Ideation Project. In 2018, Ghomeshi's essay "Reflections from a Hashtag" was published in The New York Review of Books, which led to widespread criticism of the magazine. Source: Wikipedia (en)