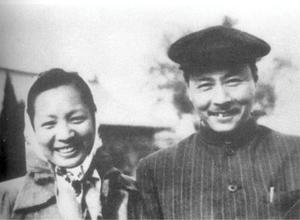 Ye Qianyu (or Yeh Ch'ien-yü; 31 March 1907 – 5 May 1995) was a Chinese painter and pioneering manhua artist. In 1928, he cofounded Shanghai Manhua, one of the earliest and most influential manhua magazines, and created Mr. Wang, one of China's most famous comic strips. Ye was also a master of traditional Chinese painting and served as the head of the Department of Chinese Painting of the China Central Academy of Fine Arts. During the Cultural Revolution he was persecuted and imprisoned for seven years. Ye was married three times. His first two marriages, to Luo Caiyun and dancer Dai Ailian, ended in divorce. His third marriage, to movie star Wang Renmei, lasted more than 30 years until Wang's death.
Read more or edit on Wikipedia