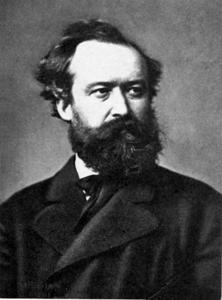 Heinrich Christian Wilhelm Busch (15 April 1832 – 9 January 1908) was a German humorist, poet, illustrator, and painter. He published wildly innovative illustrated tales that remain influential to this day. Busch drew on the tropes of folk humour as well as a profound knowledge of German literature and art to satirize contemporary life, any kind of piety, Catholicism, Philistinism, religious morality, bigotry, and moral uplift. His mastery of drawing and verse became deeply influential for future generations of comic artists and vernacular poets. Among many notable influences, The Katzenjammer Kids was inspired by Busch's Max and Moritz. Today, the Wilhelm Busch Prize and the Wilhelm Busch Museum help maintain his legacy. The 175th anniversary of his birth in 2007 was celebrated throughout Germany. Busch remains one of the most influential poets and artists in Western Europe.
Read more or edit on Wikipedia