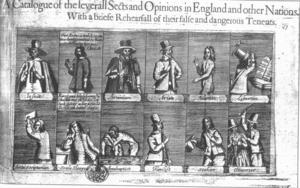 In modern English, cult is usually a pejorative term for a social group that is defined by its unusual religious, spiritual, or philosophical beliefs and rituals, or its common interest in a particular personality, object, or goal. This sense of the term is controversial and weakly defined—having divergent definitions both in popular culture and academia—and has also been an ongoing source of contention among scholars across several fields of study.: 348–56 An older sense of the word involves a set of religious devotional practices that are conventional within their culture, related to a particular figure, and often associated with a particular place. References to the "cult" of a particular Catholic saint, or the imperial cult of ancient Rome, for example, use this sense of the word. While the literal and original sense of the word remains in use, a derived sense of "excessive devotion" arose in the 19th century. Then, beginning in the 1930s, cults became an object of sociological study within the context of the study of religious behavior. Since the 1940s, the Christian countercult movement has opposed some sects and new religious movements, labeling them "cults" because of their unorthodox beliefs. Since the 1970s, the secular anti-cult movement has opposed certain groups and, as a reaction to acts of violence, frequently charged those cults with practicing mind control. Scholars and the media have disputed some of the claims and actions of anti-cult movements, leading to further public controversy. Sociological classifications of religious movements may identify a cult as a social group with socially deviant or novel beliefs and practices, although this is often unclear. Other researchers present a less-organized picture of cults, saying that they arise spontaneously around novel beliefs and practices. Groups labelled as "cults" range in size from local groups with a few followers to international organizations with millions of adherents.
Read more or edit on Wikipedia