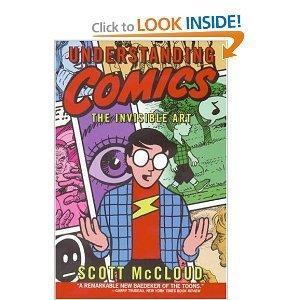 Understanding Comics: The Invisible Art is a 1993 non-fiction work of comics by American cartoonist Scott McCloud. It explores formal aspects of comics, the historical development of the medium, its fundamental vocabulary, and various ways in which these elements have been used. It expounds theoretical ideas about comics as an art form and medium of communication, and is itself written in comic book form.Understanding Comics received praise from notable comic and graphic novel authors such as Art Spiegelman, Will Eisner, Alan Moore, Neil Gaiman, and Garry Trudeau (who reviewed the book for the New York Times). Although the book has prompted debate over many of McCloud’s conclusions, its discussions of "iconic" art and the concept of "closure" between panels have become common reference points in discussions of the medium.The title of Understanding Comics is an homage to Marshall McLuhan's seminal 1964 work Understanding Media.
Read more or edit on Wikipedia