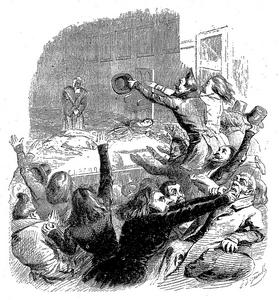 Hernani (Full title: Hernani, ou l'Honneur Castillan) is a drama by the French romantic author Victor Hugo. The title originates from Hernani, a Spanish town in the Southern Basque Country, where Hugo’s mother and her three children stopped on their way to General Hugo’s place of residence. The play was given its premiere on 25 February 1830 by the Comédie-Française in Paris. Today, it is more remembered for the demonstrations which accompanied the first performance and for being the inspiration for Verdi's opera Ernani than it is for its own merits. Hugo had enlisted the support of fellow Romanticists such as Hector Berlioz and Théophile Gautier to combat the opposition of Classicists who recognised the play as a direct attack on their values. It is used to describe the magnitude and elegance of Prince Prospero's masquerade in Edgar Allan Poe's short story, "The Masque of the Red Death". Gillenormand in Les Misérables criticizes Hernani.Giuseppe Verdi's opera Ernani, with an Italian libretto by Francesco Maria Piave, was based on the play, and first performed in Venice in 1844.
Read more or edit on Wikipedia