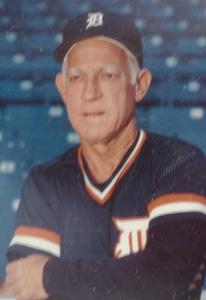 baseball player and manager from the United States

George Lee "Sparky" Anderson (February 22, 1934 – November 4, 2010) was an American Major League Baseball (MLB) player, coach, and manager. He managed the National League's Cincinnati Reds to the 1975 and 1976 championships, then added a third title in 1984 with the Detroit Tigers of the American League. Anderson was the first manager to win the World Series in both leagues. His 2,194 career wins are the sixth-most for a manager in Major League history. Anderson was named American League Manager of the Year in 1984 and 1987. He was elected to the Baseball Hall of Fame in 2000.
Read more or edit on Wikipedia