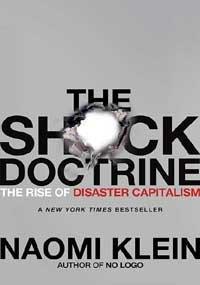 The Shock Doctrine: The Rise of Disaster Capitalism is a 2007 book by the Canadian author and social activist Naomi Klein. In the book, Klein argues that neoliberal free market policies (as advocated by the economist Milton Friedman) have risen to prominence in some developed countries because of a deliberate strategy of "shock therapy". This centers on the exploitation of national crises (disasters or upheavals) to establish controversial and questionable policies, while citizens are too distracted (emotionally and physically) to engage and develop an adequate response, and resist effectively. The book suggests that some man-made events, such as the Iraq War, were undertaken with the intention of pushing through such unpopular policies in their wake. Some reviewers criticized the book for making what they viewed as simplifications of political phenomena, while others lauded it as a compelling and important work. The book served as the main source of a 2009 documentary feature film with the same title directed by Michael Winterbottom.
Read more or edit on Wikipedia