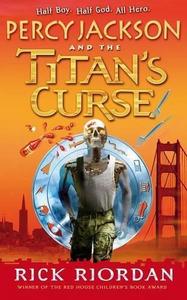 The Titan's Curse is an American fantasy-adventure novel based on Greek mythology written by Rick Riordan. It was released on May 1, 2007, and is the third novel in the Percy Jackson & the Olympians series and the sequel to The Sea of Monsters. It is about the adventures of the 14-year-old demigod Percy Jackson as he and his friends go on a dangerous quest to rescue his 14-year-old demigod friend Annabeth Chase and the Greek goddess Artemis, who have both been kidnapped by the titans. The Titan's Curse was published by Miramax Books, an imprint of Hyperion Books for Children and thus Disney Publishing (succeeded by the Disney Hyperion imprint). It was released in the United States and the United Kingdom on May 1, 2007. The novel was also released in audiobook format, read by Jesse Bernstein.Mostly well-received, The Titan's Curse was nominated for numerous awards, winning ones such as the No. 1 The New York Times children's series best seller and Book Sense Top thirty Summer Pick for 2010.
Read more or edit on Wikipedia