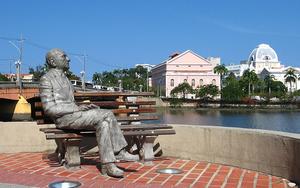 João Cabral de Melo Neto (January 6, 1920 – October 9, 1999) was a Brazilian poet and diplomat, and one of the most influential writers in late Brazilian modernism. He was awarded the 1990 Camões Prize and the 1992 Neustadt International Prize for Literature, the only Brazilian poet to receive such award to date. He was considered until his death a perennial competitor for the Nobel Prize in Literature.Melo Neto's works are noted for the rigorous, yet inventive attention they pay to the formal aspects of poetry. He derives his characteristic sound from a traditional verse of five or seven syllables (called ‘’redondilha’’) and from the constant use of oblique rhymes. His style ranges from the surrealist tendency which marked his early poetry to the use of regional elements of his native northeastern Brazil. In the auto Morte e Vida Severina, his only work which has come to be widely read by the general public, Melo Neto's addresses the culture and the unforgiving life in arid Pernambuco.
Read more or edit on Wikipedia