Diebold Schilling the Elder (c. 1445–1485) was the author of several of the Swiss illustrated chronicles, the "Berner Schilling of 1483, the "Spiezer Schilling" (1480s), and the "Zürcher Schilling" of 1484. He worked in Lucerne as a chancellor. In 1460, he moved to Berne for a post as a scribe to the city council. He was to some extent hostile towards the European powers who needed a lot of Swiss mercenaries: this could only bring internal troubles after the Burgundy wars.
Read more or edit on Wikipedia 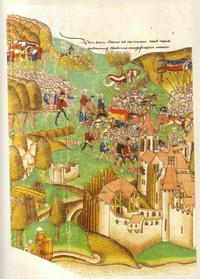