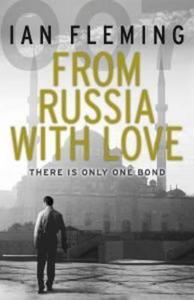 From Russia, with Love

From Russia, with Love is the fifth novel by the English author Ian Fleming to feature his fictional British Secret Service agent James Bond. Fleming wrote the story in early 1956 at his Goldeneye estate in Jamaica; at the time he thought it might be his final Bond book. The novel was first published in the United Kingdom by Jonathan Cape on 8 April 1957. The story centres on a plot by SMERSH, the Soviet counter-intelligence agency, to assassinate Bond in such a way as to discredit both him and his organisation. As bait, the Russians use a beautiful cipher clerk and the Spektor, a Soviet decoding machine. Much of the action takes place in Istanbul and on the Orient Express. The book was inspired by Fleming's visit to Turkey on behalf of The Sunday Times to report on an Interpol conference; he returned to Britain by the Orient Express. From Russia, with Love deals with the East–West tensions of the Cold War, and the decline of British power and influence in the post-Second World War era. From Russia, with Love received broadly positive reviews at the time of publication. The book's sales were boosted by an advertising campaign that played upon a visit by the British Prime Minister Anthony Eden to the Goldeneye estate, and the publication of an article in Life, which listed From Russia, with Love as one of US President John F. Kennedy's ten favourite books. The story was serialised in the Daily Express newspaper, first in an abridged, multi-part form and then as a comic strip. In 1963 it was adapted into the second film in the Bond series, starring Sean Connery.
Read more or edit on Wikipedia