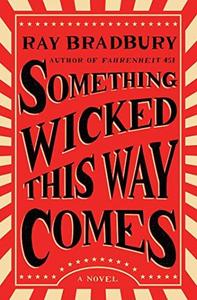 Something Wicked This Way Comes

Something Wicked This Way Comes is a 1962 dark fantasy novel by Ray Bradbury. It is about two 13-year-old best friends, Jim Nightshade and William Halloway, and their nightmarish experience with a traveling carnival that comes to their Midwestern home, Green Town, Illinois, on October 24th. In dealing with the creepy figures of this carnival, the boys learn how to combat fear. The carnival's leader is the mysterious "Mr. Dark", who seemingly wields the power to grant the townspeople's secret desires. In reality, Dark is a malevolent being who, like the carnival, lives off the life force of those they enslave. Mr. Dark's presence is countered by that of Will's father, Charles Halloway, the janitor of the town library, who harbors his own secret fear of growing older because he feels he is too old to be Will's dad. The novel combines elements of fantasy and horror, analyzing the conflicting natures of good and evil that exist within all individuals. Unlike many of Bradbury's other novel-length works, such as Dandelion Wine and The Martian Chronicles, which are fix-ups, Something Wicked This Way Comes is a single, full-length narrative. The title is taken from "By the pricking of my thumbs, something wicked this way comes," a line said by the witches in Shakespeare's Macbeth.
Read more or edit on Wikipedia