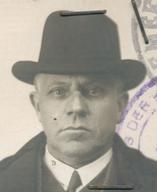 country of citizenship:  Kingdom of the Netherlands
occupation:  businessperson

Emanuel Querido (6 August 1871 – 23 July 1943) was a successful Dutch publisher as the founder and owner of N.V. Em. Querido Uitgeversmaatschappij, which published Dutch titles, and of Querido Verlag, which published titles of German writers in exile from Nazi Germany. Although he and his wife were murdered by the Nazis in 1943, his company has gone on to publish several important authors. Source: Wikipedia (en)