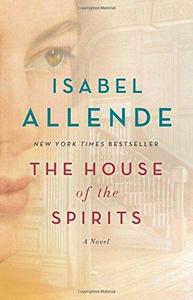 The House of the Spirits

The House of the Spirits (Spanish: La casa de los espíritus, 1982) is the debut novel of Isabel Allende. The novel was rejected by several Spanish-language publishers before being published in Buenos Aires in 1982. It became an instant best seller, was critically acclaimed, and catapulted Allende to literary stardom. The novel was named Best Novel of the Year in Chile in 1982, and Allende received the country's Panorama Literario award. The House of the Spirits has been translated into over 37 languages.The book was first conceived by Allende when she received news that her 100-year-old grandfather was dying. She began to write him a letter that ultimately became the manuscript of The House of the Spirits.The story details the life of the Trueba family, spanning four generations, and tracing the post-colonial social and political upheavals of Chile – though the country's name, and the names of figures closely paralleling historical ones, such as "the President" or "the Poet", are never explicitly given. The story is told mainly from the perspective of two protagonists (Esteban and Alba) and incorporates elements of magical realism.
Read more or edit on Wikipedia