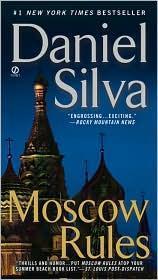 Moscow Rules is a 2008 spy novel by Daniel Silva.Featuring Gabriel Allon as a spy/assassin who works undercover as an art restorer, Moscow Rules explores the world of a rising Russia. The villain is a rich Russian oligarch who is a weapons dealer. The title is based on the Cold War rules in which CIA agents were trained when operating against the Soviet Union, known as the "Moscow Rules" — for example, "Don't look back, you are never alone".
Read more or edit on Wikipedia