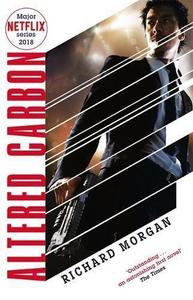 Altered Carbon is a 2002 cyberpunk novel by British writer Richard K. Morgan. Set in a future in which interstellar travel is facilitated by transferring consciousnesses between bodies ("sleeves"), it follows the attempt of Takeshi Kovacs, a former U.N. elite soldier turned private investigator, to investigate a rich man's death. It is followed by the sequels Broken Angels and Woken Furies. The book was adapted as a Netflix television series, also titled Altered Carbon, in 2018. In 2019 a graphic novel was created with Dynamite Comics.
Read more or edit on Wikipedia