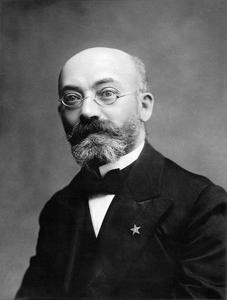 Polish ophthalmologist and inventor of Esperanto

Ludwik Łazarz Zamenhof (15 December 1859 – 14 April 1917) was a Polish ophthalmologist who lived for most of his life in Warsaw. He is best known as the creator of Esperanto, the most widely used constructed international auxiliary language.Zamenhof first developed the language in 1873 while still in school. He grew up fascinated by the idea of a world without war. He believed that this could happen with the help of a new international auxiliary language. The language would be a tool to gather people together through neutral, fair, equitable communication. He successfully formed a community that continues today despite the World Wars of the 20th century. Also, it has developed like other languages, through the interaction and creativity of its users.In light of his achievements, and his support of intercultural dialogue, UNESCO selected Zamenhof as one of its eminent personalities of 2017, on the 100th anniversary of his death.
Read more or edit on Wikipedia