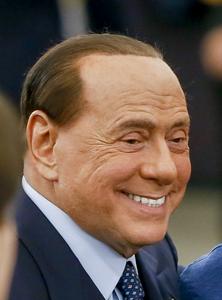 Silvio Berlusconi ( BAIR-luu-SKOH-nee, Italian: [ˈsilvjo berluˈskoːni] (listen); born 29 September 1936) is an Italian media tycoon and politician who has served as Prime Minister of Italy in four governments. He has served as a Member of the European Parliament (MEP) since July 2019.Berlusconi is the controlling shareholder of Mediaset and owned the Italian football club A.C. Milan from 1986 to 2017. He is nicknamed Il Cavaliere (The Knight) for his Order of Merit for Labour, although he voluntarily resigned from this order in March 2014. In 2018, Forbes magazine ranked him as the 190th richest man in the world with a net worth of US$8.0 billion. In 2009, Forbes ranked him 12th in the List of The World's Most Powerful People due to his domination of Italian politics, throughout more than twenty years at the head of the centre-right coalition.Berlusconi was Prime Minister for nine years in total, making him the longest serving post-war Prime Minister of Italy, and the third longest-serving since Italian unification, after Benito Mussolini and Giovanni Giolitti. He was the leader of the centre-right party Forza Italia from 1994 to 2009, and its successor party The People of Freedom from 2009 to 2013. Since November 2013, he has led a revived Forza Italia. Berlusconi was the senior G8 leader from 2009 until 2011 and he currently holds the record for hosting G8 Summits (having hosted three Summits in Italy). After serving nearly 19 years as member of the Chamber of Deputies, Italy's lower house, after the 2013 general election he became a member of the Senate. On 1 August 2013, he was convicted of tax-fraud by the court of final instance, Court of Cassation, confirming his four-year prison sentence (of which three years are automatically pardoned) along with a public office ban for two years. As his age exceeded 70 years, he was exempted from direct imprisonment, and instead served his sentence by doing unpaid social community work. Because he had been sentenced to a gross imprisonment for more than two years, a new Italian anti-corruption law led to the Senate expelling and barring him from serving in any legislative office for six years. Berlusconi has pledged to stay leader of Forza Italia throughout his custodial sentence and public office ban. After his ban ended, Berlusconi ran for and was successfully elected as an MEP at the 2019 European Parliament election.Berlusconi was the first person to assume the premiership without having held any prior government or administrative offices. He is known for his populist political style and brash, overbearing personality. In his long tenure, he was often accused of being an authoritarian leader and a strongman. Berlusconi still remains a controversial figure who divides public opinion and political analysts. Supporters emphasize his leadership skills and charismatic power, his fiscal policy based on tax reduction, and his ability to maintain strong and close foreign relations with both the United States and Russia. In general, critics address his performance as a politician, and the ethics of his government practices in relation to his business holdings. Issues with the former include accusations of having mismanaged the state budget and of increasing the Italian government debt. The second criticism concerns his vigorous pursuit of his personal interests while in office, including benefitting from his own companies' growth due to policies promoted by his governments, having vast conflicts of interest due to ownership of a media empire with which he has restricted freedom of information and finally, being blackmailed as leader because of his turbulent private life.
Read more or edit on Wikipedia