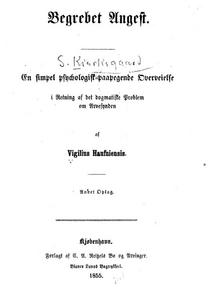 The Concept of Anxiety

The Concept of Anxiety (Danish: Begrebet Angest): A Simple Psychologically Orienting Deliberation on the Dogmatic Issue of Hereditary Sin, is a philosophical work written by Danish philosopher Søren Kierkegaard in 1844. The original 1944 English translation by Walter Lowrie (now out of print), had the title The Concept of Dread. The Concept of Anxiety was dedicated "to the late professor Poul Martin Møller". He used the pseudonym Vigilius Haufniensis (which, according to Kierkegaard scholar Josiah Thompson, is the Latin transcription for "the Watchman" of Copenhagen) for The Concept of Anxiety.All of Kierkegaard's books have either a preface, dedication, or prayer at the beginning. This book includes a lengthy introduction. The Concept of Anxiety was published on exactly the same date as Prefaces, June 17, 1844. Both books deal with Hegel’s idea of mediation. Mediation is a common thread throughout Kierkegaard’s works. His work up to this point was to show that faith was being mediated by knowledge. Here he takes up the questions of sin and guilt. For Kierkegaard, anxiety/dread/angst is unfocused fear. Kierkegaard uses the example of a man standing on the edge of a tall building or cliff. When the man looks over the edge, he experiences a focused fear of falling, but at the same time, the man feels a terrifying impulse to throw himself intentionally off the edge. That experience is anxiety or dread because of our complete freedom to choose to either throw oneself off or to stay put. The mere fact that one has the possibility and freedom to do something, even the most terrifying of possibilities, triggers immense feelings of dread. Kierkegaard called this our "dizziness of freedom." Kierkegaard focuses on the first anxiety experienced by man: Adam's choice to eat from God's forbidden tree of knowledge or not. Since the concepts of good and evil did not come into existence before Adam ate the fruit, Adam had no concept of good and evil, and did not know that eating from the tree was "evil." What he did know was that God told him not to eat from the tree. The anxiety comes from the fact that God's prohibition itself implies that Adam is free and that he could choose to obey God or not. After Adam ate from the tree, sin was born. So, according to Kierkegaard, anxiety precedes sin. Kierkegaard mentions that anxiety is the presupposition for hereditary sin (which Augustine was the first to call peccatum originale, "original sin"). However, Kierkegaard mentions that anxiety is a way for humanity to be saved as well. Anxiety informs us of our choices, our self-awareness and personal responsibility, and brings us from a state of un-self-conscious immediacy to self-conscious reflection. (Jean-Paul Sartre calls these terms pre-reflective consciousness and reflective consciousness.) An individual becomes truly aware of their potential through the experience of anxiety. So, anxiety may be a possibility for sin, but anxiety can also be a recognition or realization of one's true identity and freedom. Alternatively, sin exists in the very resolution of anxiety through right and wrong; why to embrace anxiety is to not pass judgement.
Read more or edit on Wikipedia