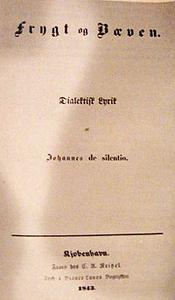 Fear and Trembling (original Danish title: Frygt og Bæven) is a philosophical work by Søren Kierkegaard, published in 1843 under the pseudonym Johannes de silentio (John of the Silence). The title is a reference to a line from Philippians 2:12, "...continue to work out your salvation with fear and trembling." — itself a probable reference to Psalms 55:5, "Fear and trembling came upon me..." Kierkegaard wanted to understand the anxiety that must have been present in Abraham when "God tested [him] and said to him, take Isaac, your only son, whom you love, and go to the land of Moriah and offer him as a burnt offering on the mountain that I shall show you." Abraham had a choice to complete the task or to refuse to comply with God's orders. He resigned himself to the three-and-a-half-day journey and to the loss of his son. "He said nothing to Sarah, nothing to Eliezer. Who, after all, could understand him, for did not the nature of temptation extract from him a pledge of silence? He split the firewood, he bound Isaac, he lit the fire, he drew the knife." Because he kept everything to himself and chose not to reveal his feelings he "isolated himself as higher than the universal." Kierkegaard envisions two types of people in Fear and Trembling and Repetition. One lives in hope, Abraham, the other lives in memory, The Young Man and Constantin Constantius. He discussed them beforehand in Lectures delivered before the Symparanekromenoi and The Unhappiest Man. One hopes for happiness from something "out there" while the other finds happiness from something in themself. This he brought out in his upbuilding discourse, published on the same date. When one person sees one thing and another sees something else in the same thing, then the one discovers what the other conceals. Insofar as the object viewed belongs to the external world, then how the observer is constituted is probably less important, or, more correctly then what is necessary for the observation is something irrelevant to his deeper nature. But the more the object of observation belongs to the world of the spirit, the more important is the way he himself is constituted in his innermost nature, because everything spiritual is appropriated only in freedom; but what is appropriated in freedom is also brought forth. The difference, then, is not the external but the internal, and everything that makes a person impure and his observation impure comes from within. Søren Kierkegaard, Three Upbuilding Discourses, 1843, Hong p. 59-60 Kierkegaard says, "Infinite resignation is the last stage before faith, so anyone who has not made this movement does not have faith, for only in infinite resignation does an individual become conscious of his eternal validity, and only then can one speak of grasping existence by virtue of faith." He spoke about this kind of consciousness in an earlier book. "There comes a moment in a person's life when immediacy is ripe, so to speak, and when the spirit requires a higher form, when it wants to lay hold of itself as spirit. As immediate spirit, a person is bound up with all the earthly life, and now spirit wants to gather itself together out of this dispersion, so to speak, and to transfigure itself in itself; the personality wants to become conscious in its eternal validity. If this does not happen, if the movement is halted, if it is repressed, then depression sets in." Once Abraham became conscious of his eternal validity he arrived at the door of faith and acted according to his faith. In this action he became a knight of faith. In other words, one must give up all his or her earthly possessions in infinite resignation and must also be willing to give up whatever it is that he or she loves more than God.Kierkegaard used the ethical system of Georg Wilhelm Friedrich Hegel and the aesthetic stories of Agnes and the merman, Iphigenia at Aulis and others to help the reader understand the difference between the inner world of the spirit and the outer world of ethics and aesthetics.Several authorities consider the work autobiographical. It can be explained as Kierkegaard's way of working himself through the loss of his fiancee, Regine Olsen. Abraham becomes Kierkegaard and Isaac becomes Regine in this interpretation.
Read more or edit on Wikipedia