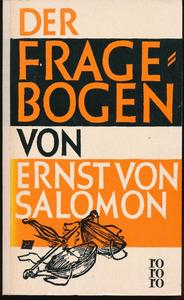 The Questionnaire (German: Der Fragebogen) is a 1951 autobiographical novel by the German writer Ernst von Salomon. It was published in the United Kingdom as The Answers. It is based on the denazification questionnaire which all Germans with some form of responsibility were forced to take by the military government after World War II. Salomon's detailed answers about his political background, membership of various organisations and so on become a portrayal of Germany during the interwar period, World War II and the immediate post-war period. The book became a phenomenon in Germany and sold in large numbers. It was a reference point in the public discourse for years and has continued to be in print.
Read more or edit on Wikipedia