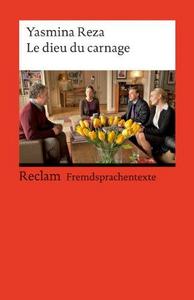 God of Carnage (originally in French Le Dieu du carnage) is a play by Yasmina Reza and was first published in 2008. It is about two sets of parents, one of whose child has hurt the other at a public park. They agree to meet to discuss the matter in a civilized manner. However, as the evening goes on, the parents become increasingly childish, resulting in the evening devolving into chaos. Originally written in French, the play was a success. It has since been translated into English by translator Christopher Hampton, and has enjoyed equal acclaim in productions in both London and New York.
Read more or edit on Wikipedia