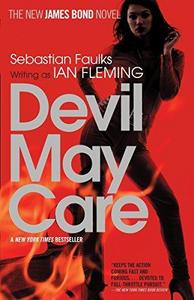 Devil May Care is a James Bond continuation novel written by Sebastian Faulks. It was published in the UK by Penguin Books on 28 May 2008, the 100th anniversary of the birth of Ian Fleming, the creator of Bond. The story centres on Bond's investigation into Dr Julius Gorner, a megalomaniac chemist with a deep-seated hatred of England. Faulks wrote the book in the style of Fleming, and the novel carried the credit "Sebastian Faulks writing as Ian Fleming"; he also took the same timeframe as Fleming, setting the novel in 1967, following the events in Fleming's last novel The Man with the Golden Gun. He ignored the influences of the other Bond continuation authors and the films, producing a characterisation of Bond in the style of Fleming's. The novel was broadly well received by critics and went into the best-seller lists by the end of the first week of sales, selling 44,093 copies in four days to become the fastest-selling fiction book after the Harry Potter titles. Faulks stated that although he enjoyed writing the book, he would write no more Bond novels.
Read more or edit on Wikipedia