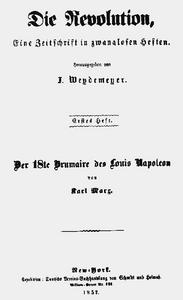 The Eighteenth Brumaire of Louis Bonaparte

The Eighteenth Brumaire of Louis Napoleon (German: Der 18te Brumaire des Louis Napoleon) is an essay written by Karl Marx between December 1851 and March 1852, and originally published in 1852 in Die Revolution, a German monthly magazine published in New York City and established by Joseph Weydemeyer. Later English editions, such as an 1869 Hamburg edition, were entitled The Eighteenth Brumaire of Louis Bonaparte. The essay discusses the French coup of 1851 in which Louis-Napoléon Bonaparte assumed dictatorial powers. It shows Marx in his form as a social and political historian, treating actual historical events from the viewpoint of his materialist conception of history. The title refers to the Coup of 18 Brumaire in which Napoleon Bonaparte seized power in revolutionary France (9 November 1799, or 18 Brumaire Year VIII in the French Republican Calendar), in order to contrast it with the coup of 1851.
Read more or edit on Wikipedia