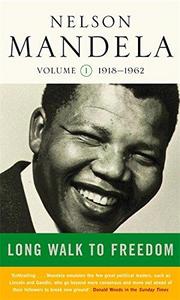 Long Walk to Freedom is an autobiography credited to South African President Nelson Mandela. It was ghostwritten by Richard Stengel and first published in 1994 by Little Brown & Co. The book profiles his early life, coming of age, education and 27 years spent in prison. Under the apartheid government, Mandela was regarded as a terrorist and jailed on the infamous Robben Island for his role as a leader of the then-outlawed African National Congress (ANC). He later achieved international recognition for his leadership as president in rebuilding the country's once segregationist society. The last chapters of the book describe his political ascension and his belief that the struggle still continued against apartheid in South Africa.Mandela dedicated his book to "my six children, Madiba and Makaziwe (my first daughter) who are now deceased, and to Makgatho, Makaziwe, Zenani and Zindzi, whose support and love I treasure; to my twenty-one grandchildren and three great-grandchildren who give me great pleasure; and to all my comrades, friends and fellow South Africans whom I serve and whose courage, determination and patriotism remain my source of inspiration."
Read more or edit on Wikipedia