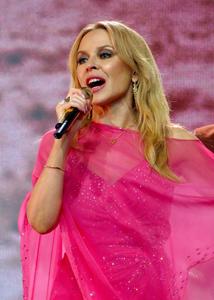 Kylie Ann Minogue (; born 28 May 1968), often known simply as Kylie, is an Australian singer, songwriter, actress, record producer and television judge. Having sold over 70 million records worldwide, Minogue is the highest-selling female Australian artist of all time and has been recognised for reinventing herself in music and fashion, for which she is referred to by the European press as the "Princess of Pop" and a style icon. Her accolades include a Grammy Award, three Brit Awards and 17 ARIA Music Awards. Born and raised in Melbourne, Minogue achieved recognition starring in the Australian soap opera Neighbours, playing tomboy mechanic Charlene Robinson. She gained prominence as a recording artist in the late 1980s and released four bubblegum and dance-pop-influenced studio albums produced by Stock Aitken Waterman and released by PWL. By the early 1990s, she had amassed several top ten singles in the UK and Australia, including "I Should Be So Lucky", "The Loco-Motion", "Hand on Your Heart", and "Better the Devil You Know". Taking more creative control over her music, in 1993, Minogue signed with Deconstruction Records, where she released Kylie Minogue (1994) and Impossible Princess (1997), both of which received positive reviews, and the latter being described as her most personal and best work. She returned to mainstream dance-oriented music with 2000's Light Years, which was preceded by lead single "Spinning Around". The follow-up, Fever (2001) was an international breakthrough for Minogue and became her best-selling album to date. Its lead single, "Can't Get You Out of My Head" became one of the most successful singles of the 2000s, selling over five million units. Minogue continued reinventing her image and experimenting with a range of genres on her next albums, which produced successful singles such as "Slow", "2 Hearts" and "All the Lovers". With her 2020 album release Disco, she became the first female artist to have a chart-topping album in the UK for five consecutive decades. Minogue made her film debut in The Delinquents (1989) and portrayed Cammy in Street Fighter (1994). She has also appeared in the films Moulin Rouge! (2001), Jack & Diane, Holy Motors (2012) and San Andreas (2015). In 2014, she appeared as a judge on the third series of The Voice UK and The Voice Australia. Her other ventures include product endorsements, children's books, fashion, and charitable work. Minogue was appointed an Officer of the Order of the British Empire in the 2008 New Year Honours for services to Music. She was appointed by the French government as a Chevalier (knight) of the Ordre des Arts et des Lettres for her contribution to the enrichment of French culture. In 2005, while Minogue was on her Showgirl: The Greatest Hits Tour, she was diagnosed with breast cancer. After treatment, she resumed the tour under the title Showgirl: The Homecoming Tour, which critics viewed as a "triumph". Minogue was awarded an honorary Doctor of Health Science (D.H.Sc.) degree by Anglia Ruskin University for her work in raising awareness for breast cancer. On the 25th anniversary of the ARIA Music Awards in 2011, she was inducted by the Australian Recording Industry Association into the ARIA Hall of Fame.
Read more or edit on Wikipedia