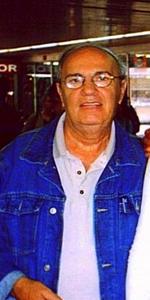 Herman A. Rosenblat (c. 1929 – February 5, 2015) was a Polish-born American author, known for writing a fictitious Holocaust memoir titled Angel at the Fence, purporting to tell the true story of a girl who passed him food through the barbed-wire fence at the Schlieben sub-camp of the Buchenwald concentration camp in World War II. The book was planned to be published in 2009 by Berkley Books, but was cancelled after it turned out that many elements of his memoir were fabricated and some were contrary to verifiable historical facts. Rosenblat later admitted to lying on purpose with the intention of bringing joy.Before the fabrication became public, the film rights to the book were purchased for $25 million by Harris Salomon of Atlantic Overseas Pictures. Other fans of the story include Oprah Winfrey who has described it as the single greatest love story she heard in over 22 years of hosting her show. The story behind Rosenblat's story is being developed as an independent feature film. In June 2010 Atlantic Overseas Pictures and producer Harris Salomon signed a co-production agreement with Castel Film Studios, a well known studio in Central and Eastern Europe and the studio for Cold Mountain and Borat as well as 3rd-i films in London, to produce a feature film about the Herman Rosenblat affair based on an original screenplay by award-winning screenwriter Ivo Marloh entitled The Apple, scheduled for production in 2015.
Read more or edit on Wikipedia

Angel at the Fence