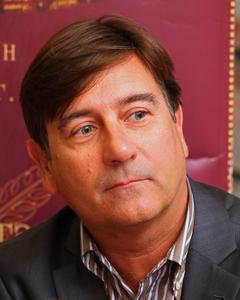 Alain Claude Sulzer (born 17 February 1953) is a Swiss writer and translator. He was born in Basel. Sulzer became a librarian, but also translated from French, for example parts of Julien Green's diaries. As a journalist he wrote for various newspapers and magazines, including the NZZ. He has published more than ten books and has won a number of literary awards in the process, such as the Rauris Literature Prize (1984), the Prix Médicis étranger (2008), or the Hermann-Hesse-Preis (2009).Sulzer started his career as a writer with the debut Das Erwachsenengerüst (1983). The novel is set in the border triangle and reflects the vicissitudes of life in the shadow of the Second World War. His novel A Perfect Waiter won the Prix Medicis Etranger and the Prix des Auditeurs de la Radio Suisse Romande and has been translated into several languages. Another novel Aus den Fugen has also met with critical and commercial success and is set to be translated into English. Die Jugend ist ein fremdes Land, was published in September 2017 by Kiepenheuer & Witsch.He lives with his partner, the theater actor Georg Martin Bode, in Basel, Alsace and Berlin.
Read more or edit on Wikipedia