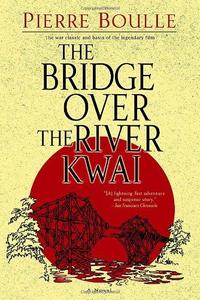 The Bridge over the River Kwai

The Bridge over the River Kwai (French: Le Pont de la rivière Kwaï) is a novel by the French novelist Pierre Boulle, published in French in 1952 and English translation by Xan Fielding in 1954. The story is fictional but uses the construction of the Burma Railway, in 1942–1943, as its historical setting, and is partly based on Pierre Boulle's own life experience working in Malaysia rubber plantations and later working for allied forces in Singapore and Indochina during World War II. The novel deals with the plight of World War II British prisoners of war forced by the Imperial Japanese Army to build a bridge for the "Death Railway", so named because of the large number of prisoners and conscripts who died during its construction. The novel won France's Prix Sainte-Beuve in 1952.
Read more or edit on Wikipedia